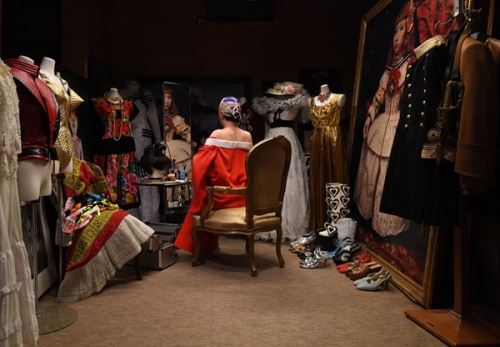 Yasumasa Morimura has been acclaimed for his self-portraits in which he re-enacts famous paintings, movies and moments in history. By incarnating himself through the skillful use of makeup and costume, he transcends time, race and gender of the subject to imbue it with a meta-commentary uniquely his own.

His video work entitled Ego Obscura, together with a lecture performance written and performed by Morimura himself, comprises the centerpieces of an exhibition in which the artist references Japan’s modern history and world culture. Morimura was born in Osaka in 1951 during the post-war occupation by the Allied Forces and educated at a time when the country’s pre-war teachings had been rejected and the resulting “void” infiltrated by Western values. This experience led him to see truth, values and ideas as things that “reside outside the body,” which like clothes could be “freely changed” at will (quotes from Ego Obscura).

In the exhibition title Ego Obscura, Morimura uses an unfamiliar word to refer to what he describes as “an ambiguous ego wrapped in darkness.” He explores this ego through self-portraits imbued with complex feelings towards a motherland that go beyond mere affection, works that direct the question “what is the meaning of the “self”?” not only to us, but to the nation of Japan itself as well.