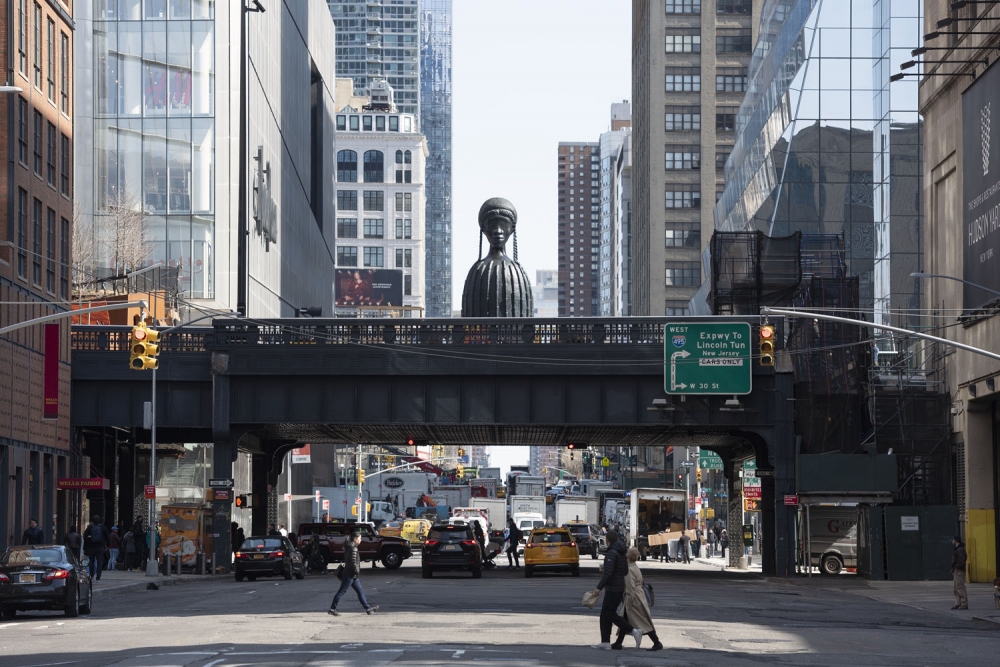 For the inaugural High Line Plinth, Simone Leigh presents Brick House, a sixteen-foot-tall bronze bust of a black woman whose torso is conflated with the forms of a skirt and a clay house. The figure will stand tall and monumental atop the Plinth, gazing resolutely down 10th Avenue. Her head is crowned with an afro, framed by cornrow braids along her hairline that extend off her scalp into four braids, each ending with a cowrie shell. The domed shape of her shoulders and bust are adorned with a pattern of elongated ridges. Brick House is the first monumental work in Anatomy of Architecture, Leigh’s continuing series of sculptures that combine architectural forms from regions as varied as West Africa and the American South with the human body. The sculpture references numerous architectural styles: Batammaliba architecture from Benin and Togo; the teleuk of the Mousgoum people of Cameroon and Chad; and the restaurant Mammy’s Cupboard from the southern U.S. All three references inform both the formal elements of the work—the conflated image of woman and architecture—and its conceptual framework.

Leigh’s Brick House will be centered on the Spur, standing in sharp contrast to the disparate elements of the immediate architectural landscape. The Plinth is the focal point of the Spur, a site whose architectural and human scales are in constant vertiginous negotiation, surrounded by a competitive landscape of glass-and-steel towers shooting up from among older industrial-era brick buildings. In this space, Leigh’s magnificent black female figure challenges visitors to think more immediately about the architecture around them, and how it reflects customs, values, priorities, and society as a whole.