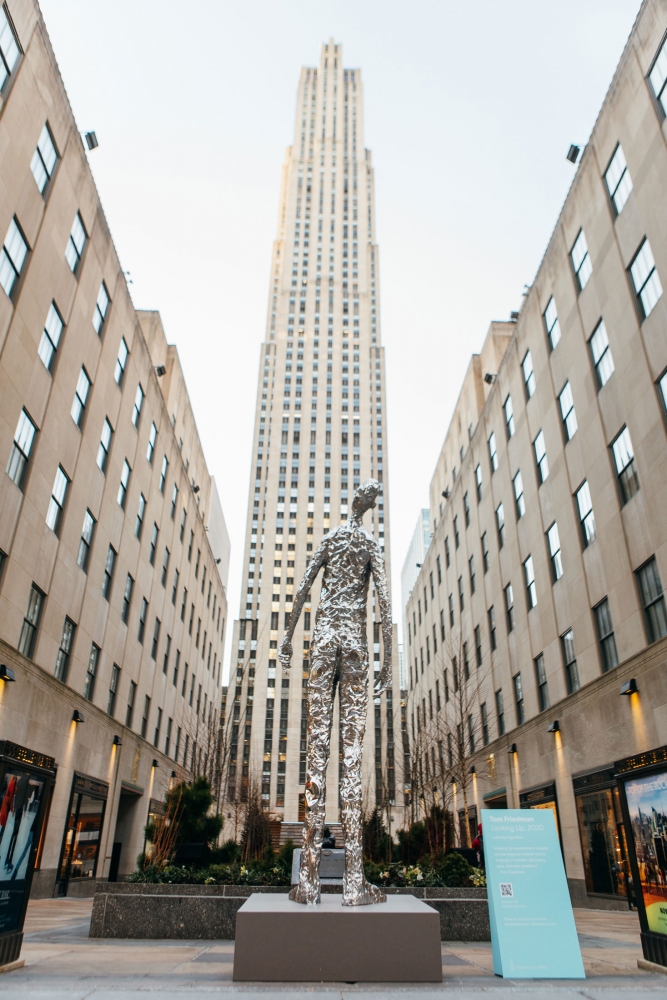 Tom Friedman, "Looking Up," 2020 at Rockefeller Center, NYC from Luhring Augustine on Vimeo.

A new public sculpture by Tom Friedman, Looking Up (2020), is now on view in midtown New York City at the entrance of Rockefeller Center’s Channel Gardens, 5th Avenue between 49th and 50th Streets, from January 20 until March 19, 2021.

Looking Up is a larger-than-life sculpture of a figure contemplating the sky with a delightful sense of wonder and awe. Cast in highly polished stainless steel, the subject’s stance captures the familiar impulse to gaze up in admiration of a flying bird, a passing plane, or an iconic skyscraper. Situated on the busy stretch of Fifth Avenue just outside Rockefeller Center, this public work invites viewers to stand at its base and marvel at the surrounding architecture.

The sculpture was cast in exquisite detail from a maquette originally fashioned by the artist from aluminum foil roasting trays. Friedman embraces the creases and lines of these malleable forms, transforming the domestic and disposable with an alchemic touch. Inviting viewers to look afresh at the familiar and the everyday. Looking Up embodies the artist’s playful and exacting approach to artmaking.

While this new 10 foot version of the sculpture was created for an outdoor landscape, the work’s first iteration made in 2012 was 3 feet tall and exhibited in London. In 2014, that original sculpture inspired Friedman to execute another version of the work at a majestic height of 33 feet tall. Examples from that monumental 2014 edition have been installed temporarily at Park Avenue, New York, NY, South Lake Shore Drive, Chicago, IL, and Tom Hanafan River’s Edge Park, Council Bluffs, IO; two are now permanently situated at the Contemporary Austin, TX and St. Louis Science Center and Planetarium, MO.